Requeening with a division board

No need to find and kill old queen?

Beginner and experienced beekeepers alike are often daunted by the prospect of requeening. Most other methods start with â€˜kill the old queenâ€™.

A simpler first step is to create a nucleus colony within the same hive using a division board. The division board consists of a sheet of hardwood, plywood or metal fitted with 10 mm risers top and bottom. A gap in one of the risers on the short side makes an entrance. 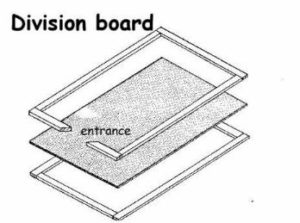 Use a strong two or three deck colony. Ensure the queen is in the brood chamber – she will be if a queen excluder is used.
Take two frames of brood with nurse bees attached but not the queen and replace with good brood comb or foundation.
Place the division board between the brood chamber and honey super or below the top honey super depending on hive size and strength. The entrance should face the opposite way to the original hive.
Lift the two frames of brood and bees without the old queen into the honey super above the division board, making sure honey and pollen is available in the box.
Place the new queen in her cage between the two frames of brood with the candy entrance facing slightly downwards so as not to collect debris.
Check the top section 14 days later by which time the new queen should be laying.

Once the new queen is laying, there are several options:

Increase your number of hives by transferring the nucleus to the brood box of a new hive placed beside the old hive. Because the entrance of the division board faces the opposite direction to the original hive, bees will soon find their way back into their new hive when it is placed alongside the parent.
Kill the queen in the hive below and replace the division board with a sheet of newspaper that the bees will chew through. Place the queen excluder under the lid until the hive is checked one or two weeks later. Find the new queen, put her in the brood box and replace the queen excluder. Requeening is complete.
If you canâ€™t find the old queen â€“ or donâ€™t want to, simply remove the division board and newspaper the two units together without looking for the old queen at all. According to one reference (NZ Beekeeper No 192 Summer 1986 pp 20-22), in almost 90% of the cases, if you unite two colonies with the young queen on the top of an old queen, the young queen will be left to head the resulting hive. Why this happens is open to argument. One explanation is that the young queen’s bees are confined in the top box when you replace the division board with newspaper. As well, her field bees returning cannot use their normal entrance, the slot on the division board. They then drift down to the main colony entrance. As they are foragers returning with a load, they will be accepted without causing outrageous fighting at the hive entrance. The old queen is then probably killed by a scissor effect. Bees foreign to her will be coming at her from two directions: down as the bees confined above the newspaper chew through and move down in the hive, and up by the foragers from the top unit coming in through the bottom entrance and finding a strange queen in their hive.

Bindaree has eight frame division boards in stock. All they need is a coat of paint.