The Joys of Swarm Collecting

Pat was standing on a two metre retaining wall and reaching out over the lawn area to cut a branch and carefully lower a large swarm. I was standing on the stepladder and holding a cardboard box under the swarm. Just a little too much weight on the branch and disaster. Pat leapt one way and landed safely on the soft grass while I coped with a shower of rather stroppy bees.

Such are the joys of swarm collecting. Every situation is different. If you are lucky the bees will have settled on a low shrub or tree within reach of the ground but often they are not so obliging. In years of collecting swarms and feral hives we have removed them from some strange and wonderful places. Weâ€™ve found swarms on shrubs and trees, trellises and pergolas, the ground, window ledges, garden furniture, a childâ€™s swing, fences, a letterbox (bet the postie was impressed), a dishwasher left on the back verandah while renovations were being done, a living room (theyâ€™d fallen down the chimney and were trying to escape through the plate glass windows), and a lawn mower. 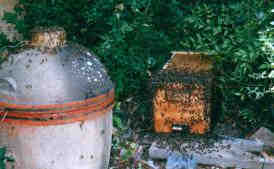 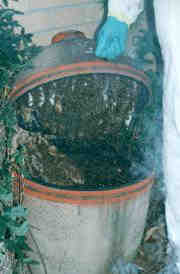 Feral hives have come from numerous bird and possum boxes, compost bins, hollow trees, hanging in overgrown trees and shrubs and vines, a box around the water heater, a dog loo (unused other than by bees), a desk stored in a carport, an esky on the front deck, a dog kennel, a guinea pig hutch, a Japanese urn barbecue, under the floor of a stilt house and a sofa on the verandah.

Weâ€™ve met some very interesting people and some we hope never to meet again. Our public relations skills have developed and weâ€™ve enjoyed many cups of tea and chats while waiting for the bees to settle and to be sure the swarm was staying in the box. Weâ€™ve experimented with various techniques and equipment and discovered some tricks that can make the job a little easier. Weâ€™ve been mistaken for the Teletubbies by a very excited toddler.

We prefer to box the swarm and leave the box until nightfall to collect all the returning bees and most people seem to prefer that. However if the box cannot be left well away from footpaths and fairly well hidden from the street we donâ€™t leave them but collect as many bees as possible and explain that the remainder will die off over a period of time or rejoin their original hive. We never leave an unattended box in a public area; itâ€™s just too risky.

When you receive a call to collect a swarm it helps if you know the circumstances. Ask where the swarm is located, how high above the ground and whether a ladder is required. Bear in mind that many people are very poor judges of heights and sizes of swarms. We find it handy to have a few cardboard boxes of various sizes folded flat in the car boot just in case. Twice while on location a second swarm has been found on the same property and the extra boxes have come in handy. Large ferals can be taken away in two boxes, one removed immediately and the other left to collect the stragglers and picked up after dark. They can be amalgamated the next day at home. 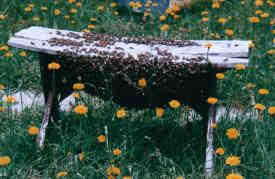 Some swarms are more accessible than others

Our swarm collecting kit contains hive tools, gloves, secateurs, ropes, sugar crystals and jar to make up syrup, tape to seal boxes, scissors, spare veils, fly spray for stragglers and an ice cream carton, very handy for collecting stragglers from awkward corners where a larger box wonâ€™t fit. If the swarm is high in a tree a collecting net or box on a long handle is very useful. We only take our own ladder if the people donâ€™t have one. 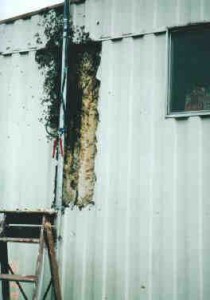 Yes, this owner was a qualified carpenter.

If you havenâ€™t tried collecting previously I urge you to give it a go. Itâ€™s a great opportunity to do some PR work for beekeeping and bees by explaining that they are not normally savage and are especially placid when swarming. We find that many people are very interested and quite a few will don a spare veil and come and have a look once the initial fuss has settled after shaking down the bees. We carry a couple of spare veils and washing up gloves for such times. If you donâ€™t need extra swarms but have some time to collect there may be other beekeepers in the association who want swarms but donâ€™t have time to collect themselves.

This article was published first in the September 2001 issue of the newsletter of the Beekeepers Association of the ACT.

Iâ€™ll Still Respect you in the Morning

(a collection of statements heard when swarm collecting and their interpretation)

This collection was published first in the February 2002 issue of the newsletter of the Beekeepers Association of the ACT.